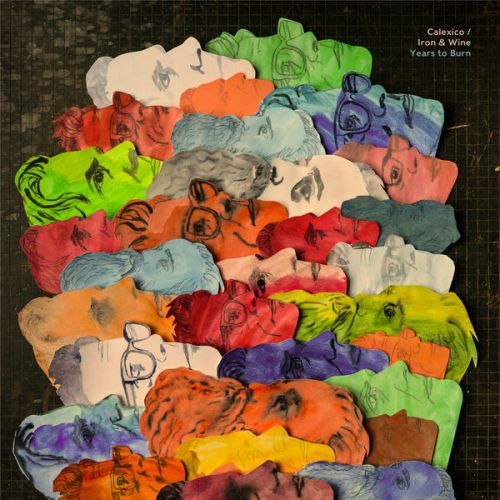 In 2005, Sam Beam – the brains behind Iron & Wine – got in touch with Joey Burns and John Convertino, of Calexico. The resulting 7-track EP, In the Reins, achieved cult status. The three artists became the talk of the Americana scene; Beam as the rising star, and the Arizonan duo as the gold standard. “In my mind, I was a guy who knew three chords and recorded in a closet,” reminisces Beam, “They were playing big stages and were superb musicians. I loved all their different sounds. They’re musical anthropologists, not regurgitating but absorbing what they discover.” Fifteen years later, they’ve gone down different paths but remained close, to the point where they decided that this time, they’d make a real album together. “Coming back to the project has to do with acknowledging how much impact the first record had for me in my life”, confesses Iron & Wine’s leader.

Years to Burn was recorded in Nashville, at the Sound Emporium – a mythical studio, created by the equally mythical Cowboy Jack Clement. Produced with the help of Matt Ross-Spang, it features Calexico’s veteran trumpeter Jacob Valenzuela, Paul Niehaus on the pedal steel, and a few other from Sam Beam’s crowd such as Rob Burger (Tin Hat Trio) on the piano and Sebastian Steinberg (Soul Coughing, Fiona Apple) on the bass. Right off the bat, all the ingredients from each of the two bands are there. This time however, the simplicity and sobriety which are so characteristic of Sam Beam’s music are further intertwined with Burns & Convertino’s Tex-Mex flavored country-rock. Although Beam is credited as the author for most of the songs, his partners in crime make this record just about perfect.  – Max Dembo